Don’t you hate it when Waze takes you with a new route just because the new route is 1 minute faster than your preferred route?

I wish Waze had a Favorite Route feature where you could set an acceptable set of criteria for it and if the fastest route is not within the set criteria then Favorite Route would be automatically selected. 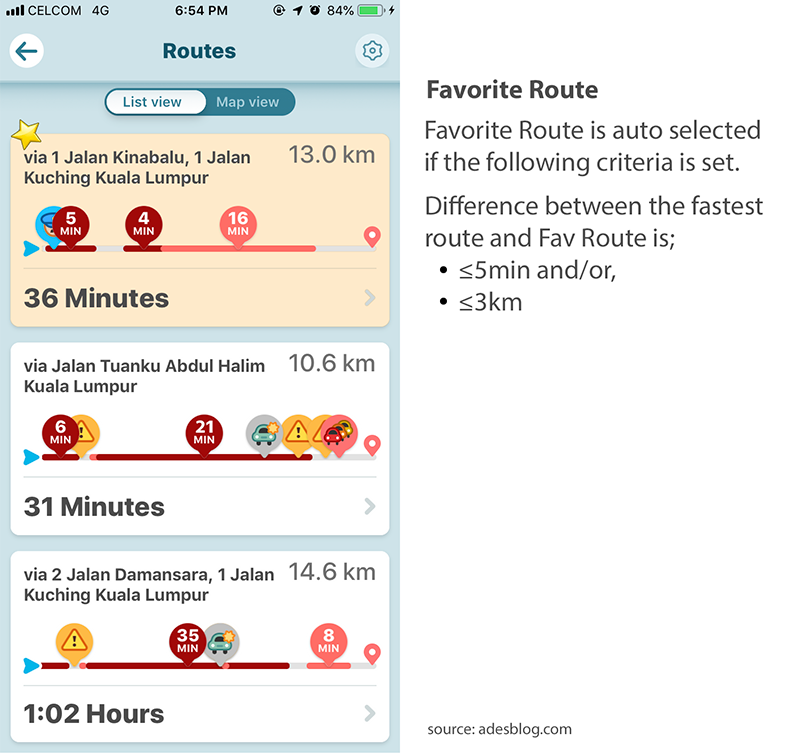 Lene Nielsen, who specializes in Personas has developed a “10 Steps to Personas” methodology. Below is an excerpt from her paper. Please follow the source link to read further, it’s worth to read.

“The persona method has developed from being a method for IT system development to being used in many other contexts, including development of products, marketing, planning of communication, and service design. Despite the fact that the method has existed since the late 1990s, there is still no clear definition of what the method encompasses. Common understanding is that the persona is a description of a fictitious person, but whether this description is based on assumptions or data is not clear, and opinions also differ on what the persona description should cover. Furthermore, there is no agreement on the benefits of the method in the design process; the benefits are seen as ranging from increasing the focus on users and their needs, to being an effective communication tool, to having direct design influence, such as leading to better design decisions and defining the product’s feature set.

A persona is not the same as an archetype or a person. The special aspect of a persona description is that you do not look at the entire person, but use the area of focus or domain you are working within as a lens to highlight the relevant attitudes and the specific context associated with the area of work.” source. 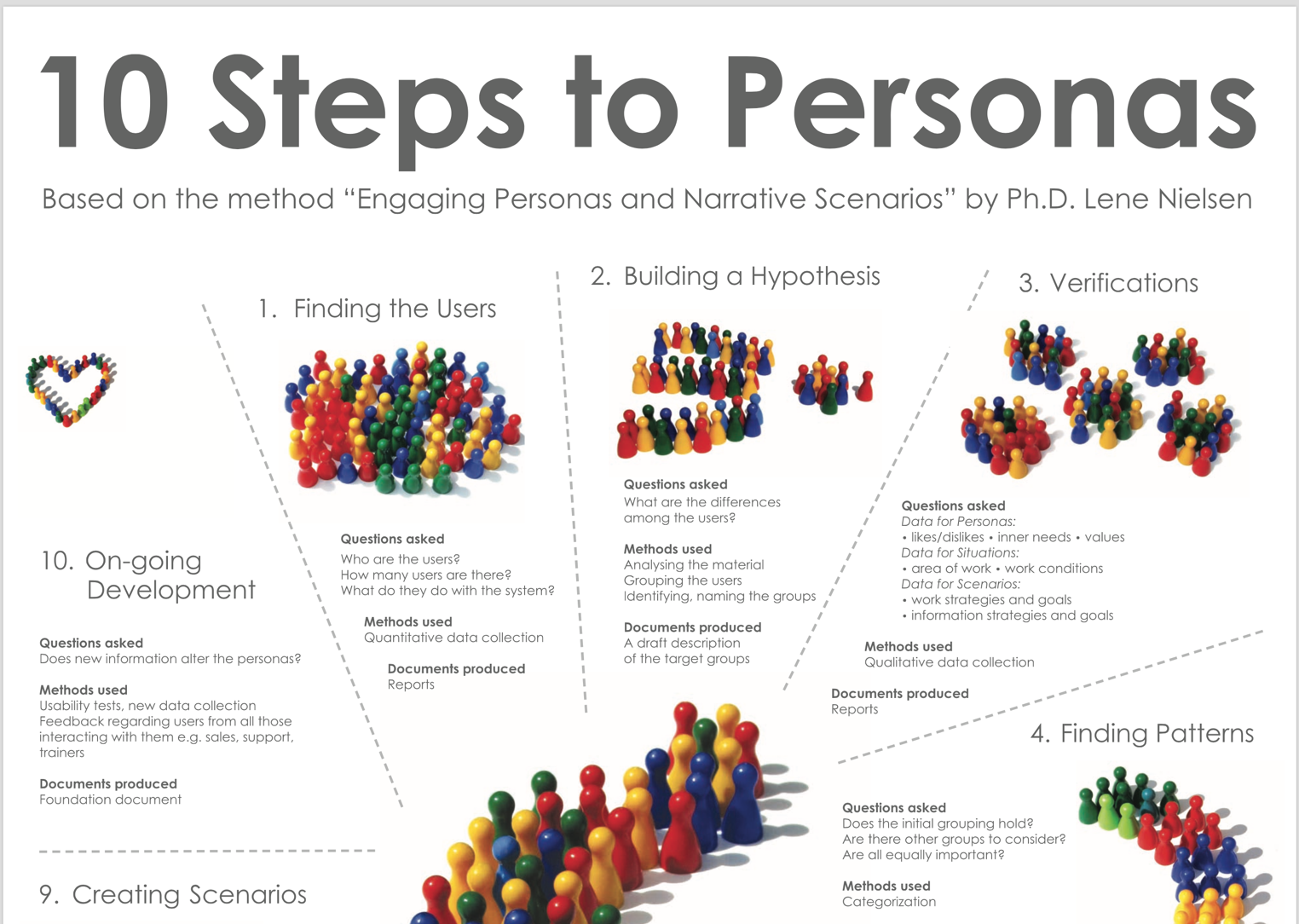 Everyone knows how great MailChimp is at what it does. As a tech startup, they have achieved a lot and they are definitely one of the startups who are doing things the right way. So, it’s only natural that when UX team of Mailchimp releases a new eBook that everyone should read it.

It’s an easy read. It’s divided into major sections like: Collaboration, Research, Design, Development and Refinement. It’s written from their own perspective, so there are a lot insights into how MailChimp approaches things like building a functional team, creating conducive office environment, how each team do what they do etc . I’m sure everyone can find something beneficial in it. I did. In his analysis of 1,333 observations of smartphones in use, Steven Hoober found about 75% of people rely on their thumb and 49% rely on a one-handed grip to get things done on their phones. On large screens (over four inches) those kinds of behaviors can stretch people’s thumbs well past their comfort zone as they try to reach controls positioned at the top of their device.

Captchas are problematic. Traditional captcha solutions have been a failure so far. Below is one of the more user friendly solutions I have come so far

Here is a great way of implementing delete confirmations in web app interfaces. It’s intuitive and usable. It’s done within the same “delete” button but with an extra click. This is how it works, you click once on the button and it will change its state to confirmation button, you click again to confirm deletion.

It’s way better than the overlay popups in the middle of the screen or other too creative ways that go counter-intuitive to the usability of the web app.

It’s from Zapier.com, kudos to them for making their UI user-friendly.

For the past few months this is how I consume the content on the web and mobile, I primarily use this method to read longer blog posts and articles. I also use it to save articles so that I can read them later.

You would ask “what’s the current problem that it requires this kind of solution?”. Well, the current problem is that there are many great blogs and websites on the web that are simply difficult to read. This could be due to many reasons. Here are some of them:

Solution is a product called Readability that works with your web browsers, smartphones and tablets. Here is how it works.

1. You sign up for an account with Readability and drag the browser bookmarklets to your browser’s toolbar. Bookmarklet works with all the major web browsers. (You can also install Google Chrome extensions)

2. And when you are browsing the web and come across a good blog post or an article that you would like to read.. 3. You just press the bookmarklet and it will send that particular page to your Readability account. Google Chrome extension gives you few options when you press the button; Read Now, Read Later, and Send to Kindle. END_OF_DOCUMENT_TOKEN_TO_BE_REPLACED

Malaysia is gearing up for General Election soon. Yesterday mainstream newspaper NST had an article about how people in Malaysia cannot even mark the voting ballots properly. It read:

AROUND the world, a simple X is all it takes to mark the spot on a ballot paper. But just leave it to Malaysians to get a little more creative when stating their choice of candidate…

…According to Election Commission figures, there were 134,058 spoilt votes cast for state assembly seats and 165,018 for parliamentary seats in 2004.

While it may sound so simple to just mark [X] beside the desired candidate, little they know that this is actually quite confusing for people, especially the elderly.

[X] is used for Deleting not Selecting

First of all, people never use [X] for selecting something. X is used for deleting, rejecting or making something void. In everyday life, people either tick or circle the preferred choice.

I am sure this problem happens in every country, it’s just more prevalent in one country than another. Sure, Governments can teach its people how to mark [X] correctly during elections and decrease the number of spoiled votes. But the better, more sustainable solution would be to introduce a system that is usable and intuitive to all people. Because when the system is flawed, you have to constantly teach the people how to use it. That means more expenses for the Government. But if the system is replaced with a functional one, the cost would decrease and there would be less errors and less headache during each election. Maybe using “tick” would help!? Or having separate “Yes” and “No” ballot boxes, where you could throw the deserved candidates? I am sure there will be dozens of other better alternatives if one was to brainstorm.

Nice Search is a WP plugin that makes your blog search “SEO friendly”.

It’s in quotes because normally search results won’t get indexed by search engines, because they are dynamic. Unless of course you store them as a static page in a specific folder in your blog.

But the plugin is still very useful, it makes your search strings “nicer” as the name of the plugin says. As you can see from the screenshot, it turns the normal wordpress search string into /search/keyword format, which is a lot more readable.

One line of CSS code can do so much to improve your blog’s readability. It’s a simple thing to do, yet I see many blogs are not making use of it. It’s the line-height: code in CSS. It defines the space between the lines. Screenshots below show two different pages; one without line-height code and another with line-height set to 20pixels.

As you can see, it’s so much easier to read the second page.

Another thing that is usually neglected is, not using whitespace around the images (i.e padding). It’s a simple thing to do too. I have blogged about it here, this post teaches you how to specify margins for your images, so that the text around the image won’t stick to the border of the image.

While these things are fairly simple things to implement in blogs (which many of us do not bother to do it), but the result that they produce is: better blog readability and professional looking blog.